I confess I don’t read books nearly often enough, but one book that I managed to get through in the not-so-distant past was Sarah Vowell’s The Wordy Shipmates. In it, she profiles the relationship between John Winthrop and Roger Williams.

John Winthrop was one of the founders of the Massachusetts Bay Colony. He led a group of Puritan immigrants from England to escape religious persecution from King Charles I. The Puritans were protestants who took issue with some of the practices of the Church of England, but the Church (and its leader, the King) saw their dissent as dangerous, so it was banned. Seeking refuge for their righteousness, the Puritans sailed west to America and set up colonies in New England — but you probably know most of that story by now.

While Winthrop and his group were on their way to America in 1629, he delivered a sermon in which he referred to their new colony as a “City upon a Hill“, both as a metaphor for the ideals the people should strive to uphold, and also to note that the world would be watching their experiment to see if they could succeed. The phrase, which was borrowed from the Bible, is still very popular with American politicians today, as colorful shorthand for American exceptionalism.

Roger Williams followed the Puritans to Boston in 1631. He started out sharing the Puritan beliefs, but he soon came into his own ideas about religion and spirituality. This, ironically, upset the Puritan leaders; having sought religious freedom in the New World, they were now content to practice their own intolerance against new ideas. For his dissenting views, Williams was banished from Boston (and nearby Plymouth) in 1636, and forced to make his home beyond their borders.

Williams advocated for true religious freedom throughout the rest of his life. The colony he went on to found, Providence Plantation, had “liberty of conscience” written into its constitution. It was Williams’ colony, and not Massachusetts, which first established the concept of true freedom of religion in America.

The Providence colony became the state of Rhode Island, where I was born. My family tree is linked to that of Roger Williams, a fact that gives me great pride. And I find it curious that the story we tell of our nation’s founding — that the Puritans came to America to establish religious freedom — glosses over some of the important details.

This country was built as a place of freedom, but also a place of compromise. We haven’t always gotten it right, even from the very beginning. The City on a Hill metaphor that we find so fitting could just as well have described a walled fortress to the settlers of Boston, rather than a shining, welcoming example for all. But almost immediately, it was proved that a walled fortress is not a free place; there will always be someone who disagrees with you on the finer points, even within those walls, and banishing them isn’t as effective a solution as you might think.

What’s remarkable about John Winthrop and Roger Williams is that, even after Williams’ banishment, the two kept regular correspondence. Vowell’s book chronicles some of it, and she marvels at the ability of these two men to continue to share their thoughts with each other, even after one of them was banished by the other.

To me, this level of discourse — exemplified by the willingness of these men to hear each other out, despite their fundamental disagreement — is as critical to the foundation of our democracy as the First Amendment. Without it, we can build all the walls we want, but our country will only crumble from the inside. 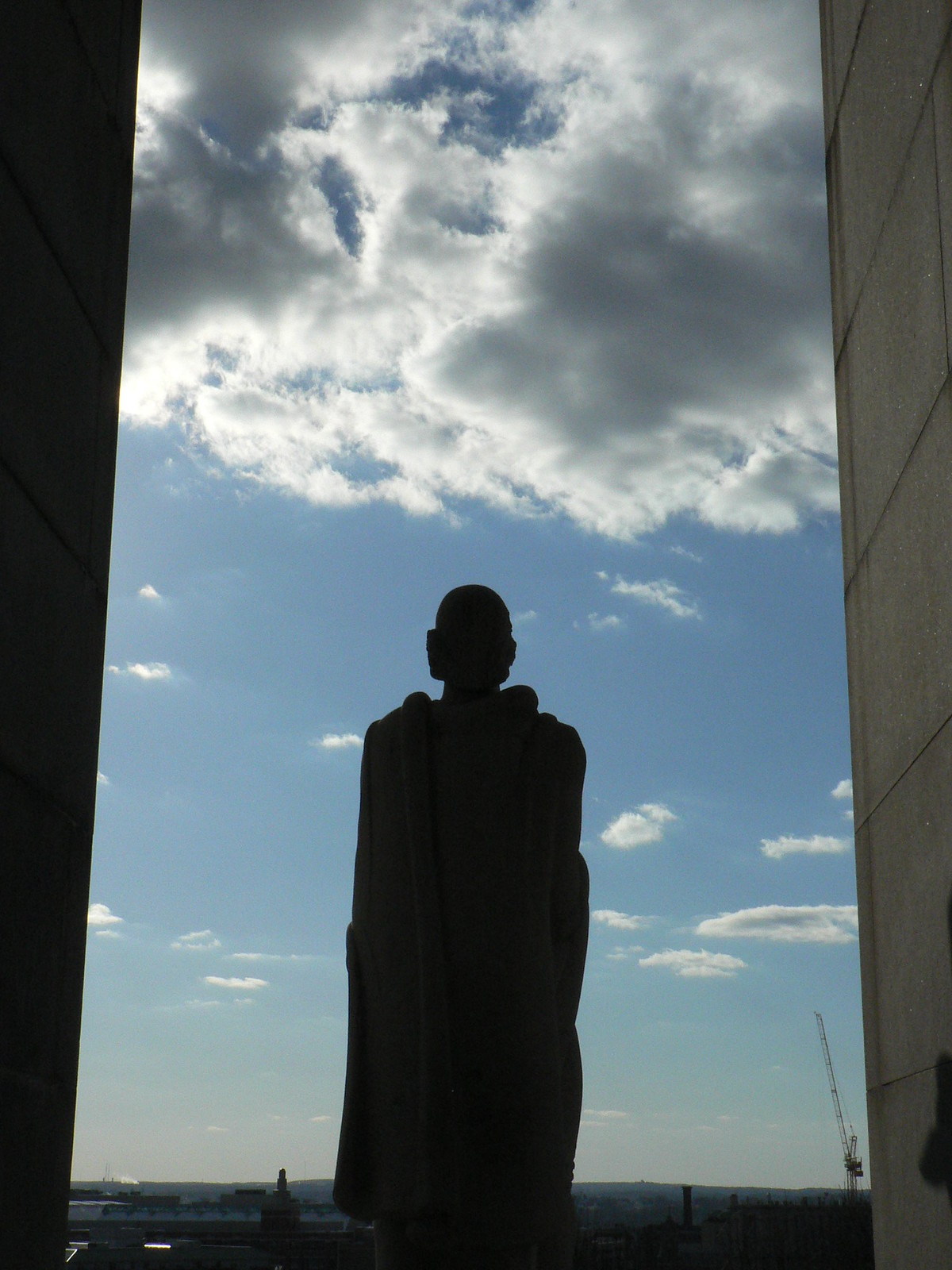 The statue of Roger Williams in Prospect Terrace Park, overlooking downtown Providence, RI. Taken by me in 2006. (Flickr)